When Diane Jarmolow, former owner and director of San Francisco’s Metronome Ballroom (one of the largest and most successful ballroom dance studios in the country, now a Cheryl Burke Dance studio), founded The Ballroom Dance Teachers College program in 1991, there was no vocational training available for ballroom dance teachers. Now, BDTC has built a template for dance teacher education that has served as a model for 40 programs throughout the United States, Canada, India and the Caribbean.

“I don’t want anyone looking back on their life and thinking, ‘I had an OK career, but more than anything, I wish I could have danced,'” says Jarmolow.

Each two-hour class typically begins with a homework presentation that analyzes various aspects of dance elements, such as understanding the open break and underarm turn in the rumba, or the follower’s role as opposed to the leader’s in the basic tango curving move. Teachers give feedback and review previous lessons before introducing new elements, such as foot and dance positions, alignment, rise and fall, amount of turn and footwork, among others. Participants will also gain important teaching skills, like vocal projection,selecting appropriate class music, rotating partners, selling dance lessons and communicating with customers.

And the rate of trainees actually using these learned skills in the field runs high. “One hundred percent of our graduates who want to teach ballroom become ballroom teachers,” says Jarmolow. “Each of our graduates find their niche, whether it’s in the public school system, at a retirement community, as a staff teacher at a studio, or as an independent teacher.” 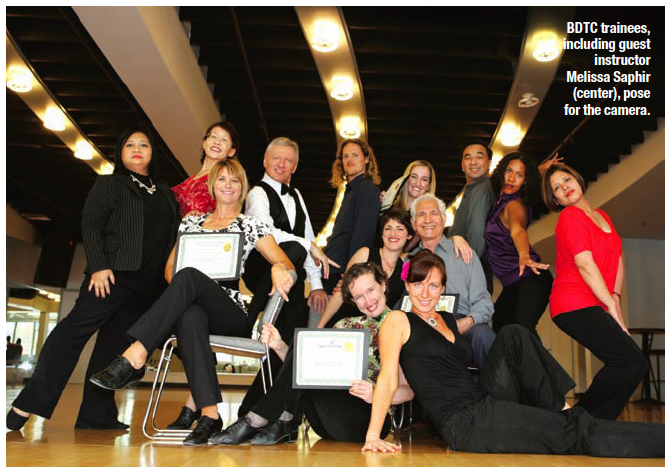